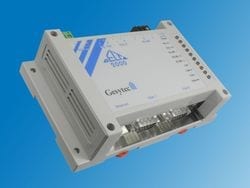 Gesytec presents its new DELTA 2000, a cost-effective embedded platform for OEM solutions, which combines serial and digital ports, network functionality and a powerful CPU with the capability of being programmed under Windows and Linux, at Embedded World 2014. In comparison to other systems that are also used for collecting and forwarding of automation data, it offers more interfaces at a significantly lower price.

The DELTA 2000’s wide range of interfaces to the field level and its network integration meet the industry standard, although the price is at the level of consumer hardware such as routers for home users, given sufficient volume. Gesytec has developed DELTA 2000 for distributed systems, for which high-end CPUs are neither necessary nor economically viable.

Using the DELTA 2000 it is possible, on the one hand, to perform local data gathering for surveillance and control systems, while on the other hand the box also offers a wide range of options for external data communication. It is frequently used as a data logger, protocol converter and data gateway.

A wide range of applications

With a power consumption of less than 3 W, the device is also ideal for tasks which rely on keeping power consumption to a minimum, such as distributed systems that are powered by solar panels, for example, for which embedded PCs were out of the question in the past.

DELTA 2000 works with Windows CE and Linux, thus enabling it to offer a fully-fledged embedded operating system for implementing your own applications.
The DELTA 2000’s compact DIN rail housing contains an iMX287 CPU with a clock speed of 454 MHz as well as numerous interfaces to the field and control level. It has a 10/100 MBit Ethernet network connection.

For accessing data from the field level it has two digital 24V in- and outputs as well as three EIA-485 ports. Analogue interfaces can be connected via Modbus if required, and a LON interface is also available as an option. Data communications to parallel or superposed systems is possible either via Ethernet or via a modem-capable RS-232 interface. A microSD card is used for mass storage.