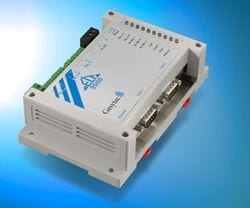 Cost-effective solution for distributed collection and forwarding of automation data

Aachen, October 2013: Gesytec presents its DELTA 2000 box with LON interface, for the first time at SPS IPC Drives 2013. DELTA 2000 is a cost-effective embedded platform for OEM solutions, which combines serial and digital ports, network functionality and a powerful CPU with the capability of being programmed under Windows and Linux. The new LON interface gives manufacturers of intelligent automation solutions an economical hardware basis to integrate their applications with fieldbus and IP networks and simultaneously use a fully-fledged operating system.

The new interface to LonWorks TP/FT also opens up the possibility of processing data from LON networks together with serial, digital or analogue information and to make it accessible to other applications via IP connections.
DELTA 2000 is an embedded PC for systems that require a variety of interfaces to the field level as well as a network connection, or in a nutshell: a black box between input and communication to external systems. For example, it is frequently used as a data logger, protocol converter and data gateway.

With its broad range of interfaces it can, on the one hand, be used for local data collection for surveillance and control systems, while on the other hand DELTA 2000 also offers a wide range of options for external data communication.

A wide range of applications

Gesytec has developed DELTA 2000 for distributed systems, for which high-end CPUs are neither necessary nor economically viable. With a power consumption of less than 3 W it is also ideal for tasks which rely on keeping power consumption to a minimum, such as distributed systems that are powered by solar panels, for example, for which embedded PCs were out of the question in the past.

DELTA 2000 operates with Windows CE and Linux, thus offering sufficient ways of implementing your own applications. In spite of its broad range of interfaces, DELTA 2000 is very economical from a hardware perspective, while also offering the possibilities of a fully-fledged embedded operating system.

The DELTA 2000’s compact DIN rail housing contains an iMX287 CPU operating at 454 MHz as well as numerous interfaces to the field and control level. It has a 10/100 Mbit Ethernet network connection.
For accessing data from the field level it has two digital 24V inputs and outputs as well as three EIA-485 ports. If required analog interfaces can be connected using the integrated Modbus. In addition to this, the new release of the DELTA 2000 also has a LonWorks TP/FT interface. Data communication to parallel or superposed systems is possible either via Ethernet or via a modem-capable EIA-232 interface. A microSD card with a maximum capacity of 32 GB is used for mass storage.

Security for your data and the investment

The high-performance CPU also allows secure data transfer, for example via a VPN. This ensures that systems cannot be manipulated by unauthorized third parties. In this respect the DELTA 2000 is far superior to a single-chip solution.
Because the DELTA 2000 is often used for 24/7 operation it is very important that the device is able to “rebound” if a problem does crop up as a result of non-stop operation over many months. This is why it has a self-monitoring system with low voltage monitoring and a watchdog.

It also offers “security” for your investment: Gesytec warrants that the device will remain available for seven years with unchanged funtionality. This ensures that any company that has implemented a solution using DELTA 2000 will have a long-term benefit from the investment, making for significant savings when it comes to development costs in the product life cycle.