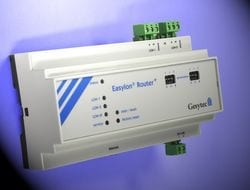 The Easylon Router+ provides highest performance for connections between LON network segments as well as between LON and IP networks in compliance with EIA-852 (LON over IP). It guarantees the maximum data throughput of TP/FT networks while allowing for a 100% data safety.

The Easylon Router+ feels especially at ease in flat network hierarchies. Different TP/FT networks can be connected to a fast IP backbone via its Ethernet interface. Thus in high-rises the potentially available powerful Ethernet wiring can be used for connection between floors. The building automation networks of the individual floors will be connected each by the Easylon Router+, which can connect two each of those partial networks to the IP backbone due to its two LON connections. The benefit: A complex, failure sensitive and as well expensive cable routing from the individual TP/FT networks to a centralized connection point does not apply. The communication via the Ethernet wiring is realized in compliance with EIA-852.

The Easylon Router+ is provided with two connections for LON-TP/FT networks. The device is connected to an IP network via a 100 MBit Ethernet interface. The Easylon Router+ is a unit realized in Gesytec‘s VNI technology. Thus the performance limits of former implementation switch and data can be safely transmitted even under full processor load of the TP/FT networks.

The Easylon Router+ provides various options for extension and structuring of networks: It can be used as router between TP/FT segments of a LON (EIA-709.1) compliant network on the one hand; on the other hand it allows as LON-IP router for transparent data transmission between EIA-709.3 and EIA-852 IP networks according to EIA-709.1.

In addition, the Easylon Router+ can also be used as common network interface ¬via TCP/IP. In this function it turns into a remote network interface while providing the benefits of all Easylon Interfaces+, where up to 8 applications can simultaneously use the interface.

The parameterization of the device is realized via a browse interface that also provides the diagnosis functions.

With its Easylon Router+ Gesytec provides a technically mature system reflecting the 20 years of experiences of the company with LON. Highly efficient, designed and tested for the development of large networks, this router is perfectly primed for further applications.