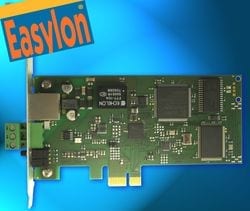 Designed as an Easylon Interface+ the new plug-in board offers simultaneous network access for up to eight applications and, compared to standard adapters, an increased performance.  Furthermore the EIA 709.1 compatible network interface card can be operated Remote Network Interface (RNI) enabling remote access to LonWorks networks.

The low profile PCIe board features RJ45 and plug screw connector as well as LonWorks service Led and push button.

The current Windows drivers from XP to Windows 7 including server operating systems are available for the new network interface, for both 32 and 64-bit systems.

Light + Building in Frankfurt will be the first opportunity to have a glance at the new interface. From April 11 to April 16 Gesytec GmbH showcases this and other intelligent solutions for the communication with the LonWorks network at the joint LonMark Germany exhibition, hall 9.0, booth E10.