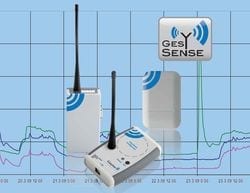 At Chillventa 2014 Gesytec will present the GesySense wireless sensor system for simple and uninterrupted temperature monitoring with battery-powered sensors. The radio sensors are quick to install, run for over five years on a single battery and need no recalibration.

Monitoring temperature “by wire” is standard, but often the cabling is annoying or even impossible.

Nevertheless, the uninterrupted monitoring and documentation – for example in food production, transportation and trade – has to be guaranteed, in order to meet legal requirements, standards and guidelines. The Commission Regulation (EC) No 37/2005 relating to quick-frozen foodstuffs for human consumption, for example, states that “the specified temperature must be sampled at frequent and regular intervals” and that “temperature records must be kept for at least a year”. Quality assurance according to HACCP and GMP as well as legal requirements also call for the temperature measurements to be recorded. Temperatures in the final step of the cold chain – shortly before the goods reach the consumer – are often measured manually, which is very time-consuming and prone to error.

The use of an easy-to-install and almost maintenance-free system pays for itself very quickly.

Wireless temperature measurement using GesySense is the right solution if:

The battery-powered wireless modules, which fit in the palm of your hand, are easy to integrate into existing systems. No cabling is required, and there is no need to meddle with existing systems.

The system’s scalability makes it suitable for widespread use in supermarkets, where a large number of freezers need to be monitored continuously. But the systems also pay off quickly in settings where they have comparatively few measuring points, such as in cold storage warehouses, gas station shops and restaurants.

It is good practice to monitor a system independently from its operation. Existing systems can quickly and easily be retrofitted with GesySense, without the need to interfere with the existing hardware. Thanks to the battery-operated loggers, GesySense continues to measure the temperature even if there is a power outage resulting in a temporary interruption in refrigeration.

Be it in a gas station shop, professional catering or in a cold storage warehouse, die battery-operated wireless modules are quick and easy to mount using their secure fasteners. Gesytec has demonstrated battery lifetimes of over 5 years in practice.
The systems are configured using a configuration module which can literally be used “in passing”. GesySense provides all of the components, from the sensors and wireless receivers, through to the data server. This allows the data to be transmitted to a higher-level system or be used directly on site. A variety of solutions can be realized, depending on the size of the system and the data usage requirements.

For instance, food manufacturers whose products are sold on refrigerated shelves in typically non-food stores are increasingly opting to monitor the storage temperature of their products independently of the operators of the sales outlets and send the data back to their offices via the Internet.

With the digital modules available with the system it is also possible to identify any incidents, such as a cold store door that has been open for too long or a cooling unit that isn’t working properly.

As pulse counters, the digital GesySense wireless modules can also be used to record consumption data. This opens up the possibility of recording operating data in technical facilities or buildings without the need for cables and getting data from locations that would be hard to reach otherwise.

GesySense is more than just a temperature monitoring system. Connected to a data server (from different manufacturers) it already has a track record as a valuable way of expanding their functionality and scope.

The technology in detail

At fixed intervals, the battery-operated GesySense wireless modules can measure temperature, humidity or accumulated counter pulses, or record the status of a connected contact. The batteries run for over five years, even in the frozen food sector. Annual calibration of the Thermo-Sensors is not necessary. The measurements are sent by wireless link immediately or can also be saved in the module.

In the middle of the wireless sensor network is the receiver, which transmits the data to higher-level systems. The wireless technology used has already proven itself with excellent ranges in buildings. Repeaters are used to transmit data over large distances or for use in difficult radio environments.