Gesytec – "The Art of Eletronic Systems"

was Gesytec’s motto for a long time. But it is not only the art of electronics that distinguishes Gesytec, but also our passion for electronics in art. We are not interested in acquiring works of art and exhibiting them on our premises. Rather, it is about actively shaping art and realizing one’s own visions that allow technology to merge with art.

The most personal work of art at Gesytec is the sinker spiral. It shows the internal optical and technical development of the circuit boards from the beginnings in the early eighties to today. The trend towards miniaturisation is particularly noticeable. Technology no longer focuses solely on functional benefits. The technical components are now also subject to aestheticization. Founding member and owner of Gesytec Dieter Schunk and employee and hobby artist Uwe Hüter, who is retired today, recognized the art in the evolution of the circuit boards and recorded it on the spiral. 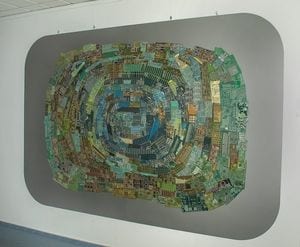 The One Heart Star was designed for Gesytec by Uwe Hüter in 1991 and shows the determinism of the technical in connection with the chance of nature, represented by the Geiger counter. The natural cosmic radiation is recorded by a sensor, the Geiger counter. The glowing lights on the One Heart Star form the stars and go out with the minutely cosmic events. The lower, red-flashing point represents the duration of a day. The important One Heart Star has been shining and flashing in our premises for 27 years. 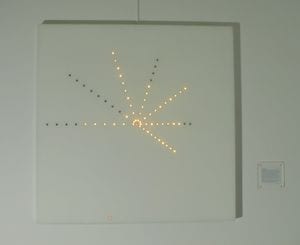 Gesytec’s home city Aachen is a city of horses and horse monuments. According to legend, Charlemagne’s horse is said to have uncovered a hot spring in the city with a scraping foot. The far-reaching tradition of equestrian sport is world-famous. Especially through the annual CHIO, the "World Equestrian Festival".  As part of the Horse Parade 2001 Gesytec developed the Electronic Horse in cooperation with the advertising agency Artline in Aachen. Electronic Horse stands for technical design using graphic elements of electronic circuit boards. The colours gold, silver, green and blue result from this colour palette. 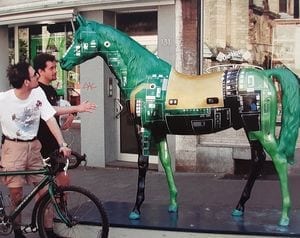 The famous Aachen designer and art blacksmith Manfred Bredohl (1944 – 2002) embellished Aachen with his art of forging. Bredohl also gained worldwide recognition for his artistic work. In 1981, he participated in a travelling exhibition of exemplary works by the German art forge in the USA and Canada. With his exhibition "Forged Steel" he was represented in Aachen, Düsseldorf and Duisburg. Among his well-known works of art are the Peace Fountain, which can be viewed at the Normaluhr in Aachen, or the Bridge of Friendship on Tempelhofer Strasse in Aachen.

Bredohl designed and forged several of his unmistakable works of art for Gesytec. When Gesytec moved into Pascalstraße, Bredohl’s art adorned the foyer. The reception counter showed a fusion of art, technology and blacksmithing. 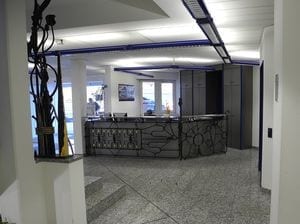 The railing also addressed this issue and formed the optical core of Gesytec. The ornate pieces of iron stretched artistically through the entire staircase. 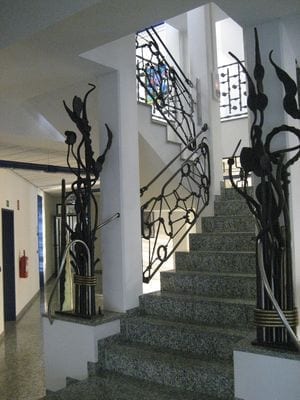 Bredohl’s art still adorns the premises of Gesytec. In the meeting room there is a lectern created by him. This is stored not least because it is too massive to move it even a centimetre. 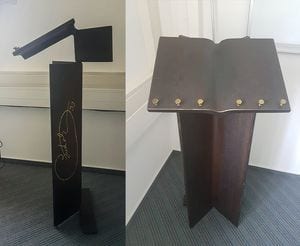