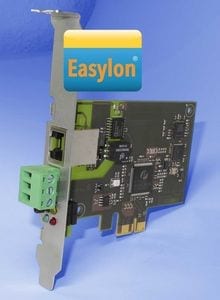 In addition to the already common version of the Easylon PCIe Interface+ for Free Topology LON networks a version for EIA-485 network sis available now.

The Easylon PCIe Interface+ is the LON interface for the computer generation of today. In the course of a facelift, the interface board was not only equipped with a FT-X2 transceiver but now becomes available with a transceiver for all systems on the market that require an EIA-485 connection.

The model change from the PCI bus is easy: You just have to install the new interface card and you are done. No existing application is affected. Because of the full software-compatibility of PCI and PCIe a costly adaptation of existing software is not required. Drivers for the Easylon PCIe Interface+ are provided for all Windows operating systems to Windows 8 including server operating systems up to 2012, for both 32 and 64-bit systems.

Applications can access the interface as VNI, virtual network interface, with the computer emulating the upper part of the protocol layers. This makes available up to eight interfaces, each having its unique node ID. Thus up to eight application gain simultaneous access to the LON network. This includes the MIP mode, which can as well make use of parallel transactions. Next to control applications management and monitoring tasks can be run on the same machine.

Like all other Easylon Interfaces this one provides full RNI (Remote Network Interface) capability. This allows a remote TCP/IP access to the interface, via LAN or internet. Monitoring a LON network is no longer restricted to the site but can be done from any networked PC.

Light + Building in Frankfurt will be a good opportunity to have a glance at the new interface. From March 30 to April 4 Gesytec GmbH showcases this interface and other solutions for the communication with the LonWorks network at the LonMark joint booth, hall 9.0, booth E10.