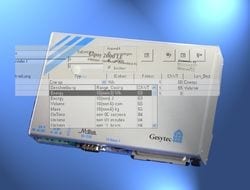 Gipsy M-Bus LON Gate­way is an efficient and robust converter in mixed installations of LON networks and M-Bus meters. Due to the integrated OPC Server the data from both networks are also available for OPC clients.

The Gipsy M-Bus LON Gateway captures M-Bus devices using an interface converter at its serial interface, an FTT interface is provided for connection to the LonWorks network. The data integration is realized in an SQL database mapping the M-Bus data to the LonWorks side, also including M-Bus address and communication status. As the Gipsy is integrated itself as node into the LON network, its data can also be used by other nodes.

The data can also be used otherwise as an integrated OPC server accesses the SQL database to provide its clients with data from both environments. Thus a separate OPC server is redundant. By filing in an SQL database the data inventory can also be directly accessed by SQL commands.

The external access to the Gipsy M-Bus LON Gateway is realized via Ethernet; optionally via ISDN or analog modem, thus enabling remote access to the data. Furthermore, an optional software extension allows for local archiving of the data and the transmission via FTP or email to remote systems.

An efficient data collector and transponder is just one matter, its easy parameterization another: The configuration program (for Windows PC) included in the Gipsy M-Bus LON Gateway provides an extendable list of predefined M-Bus device types. Just the matching device has to be selected and its address to be stated. Thus no data type entries are required. The mapping on the LonWorks side is also already defined – one LonMark object exactly corresponds to each device. Concluding the completed parameterization is loaded into the Gipsy.

If LonWorks is not required, device variants with several serial interfaces for other bus systems are available.