Riding the IoT wave with ease 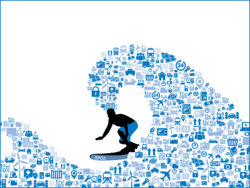 EPOS, the IoT Stack for Microcontrollers

At Light+Building 2014 Gesytec GmbH, Aachen Germany, is presenting a software solution substantially facilitating access to the Internet of Things (IoT) for device manufacturers: EPOS, a protocol stack for microprocessors which connects the application layer to the IP layer.

The Internet of Things (IoT) is set to be a big, strong wave. Any application vendor or equipment manufacturer wanting to ride this wave and implement applications using the Iot or integrate devices in the IoT needs to be well prepared.

One way of using the IoT is to IoT enable existing networked “conventional” applications. That would be the transition from IPv4 to IPv6.These applications, which have been restricted to more or less isolated networks up to now, could be significantly expanded using the IoT. For these a solution implementing IoT access just by software will be highly appreciated.

The true potential of the IoT which is set to change many sectors lies in the possibilities for new applications, using the now available incredible number of IPv6 addresses. Most of these applications haven’t even been thought of yet, let alone worked out in detail.

Regardless of whether dealing with “conventional” or new applications, if you want to get in on the IoT action, you need devices that able to make use of the IoT’s communication channels. In particular the devices have to “speak the same language”. This kind of communication capability is an essential prerequisite for implementing applications on the IoT.

In the development of solutions equipment manufacturers will primarily concentrate on those aspects covered by their core competencies. Making the devices capable of communication will add further requirements with respect to know-how and costs.

And this is precisely where EPOS by Gesytec comes into play. EPOS is a protocol stack solving the communication part in software.

EPOS integrates into the IP-capable ecosystem of a microprocessor as a software library. Its architecture is designed to minimize utilization of resources. It has its own static and scalable memory management. As a cyclic status machine, EPOS doesn’t need an operating system.

EPOS implements the LON standards ISO/IEC14908-1 and ISO/IEC14908-4. To permit its use with IPv6, the familiar LON/IP is adapted to handle the extended addressing.

EPOS is made up of two parts: The ISO/IEC14908-1 part (EPOS 7) is separate from the part realizing the physical communication (EPOS 2). This allows to easily adapt systems to meet different communication requirements. It is also possible to implement several virtual nodes in a single device, if sufficient resources are available.

A wealth of experience with LON, as an across the trades and established language, which has already proven itself millions of times in communication between “intelligent” devices, is thus available for use in the Internet of Things.

EPOS – the key to the IoT

EPOS is the key to keeping your devices from being isolated in proprietary solutions and to opening them for connection with other vendor’s solutions instead. EPOS opens the door to the IoT for devices. Manufacturers from a wide range of sectors find with EPOS the ideal way to ride the IoT wave successfully.