When the car wash sends you an e-mail … 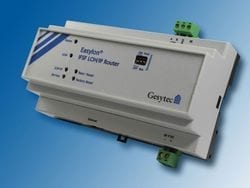 A future-proof solution for networking at gas stations

Gesytec presents its IP networking systems for connecting technical installations at gas stations to each other and to the Internet at Uniti Expo 2014, thus preparing the way ahead into a uniform IT world, which is also increasingly gaining ground at gas stations.
Networking the various individual systems at a gas station with LON is already well established, but constantly increasing data volumes and the demands made on the wide range of different technical installations – such as price displays, gas pumps, car washes – and on data acquisition are also becoming ever higher.

This is why more and more manufacturers of forecourt equipment are switching to the IFSF’s (International Forecourt Standards Forum) TCP/IP protocol. This not only promises significant operational advantages for on-site communication at the gas station, but also – via secure IP connections – for data transfer with company networks.

Gesytec also offers the right hardware for the transition between the current network protocol and IP:

With IP networking it would be possible for individual systems, such as a car wash, for example, to send an e-mail to a maintenance company in the event of a malfunction. This would allow remote diagnostics to be performed within a very short space of time, and thus get the system running again with minimal delay.

Matthias Lürkens, CTO at Gesytec, sees a clear trend: “The whole world is heading towards IP networking. With its consistency, it offers high value added when it comes to the use of technical installations and is set to become the new standard at gas stations too, sooner or later … partly because an increasing number of other services, over and above filling up, – such as the shop and snack bar – are becoming more closely interconnected. For tills, having an IP connection has already been essential for a long time now. It won’t be long before car washes may be capable of broadcasting Live News, which would have been impossible for the existing network technology to cope with.”

A unified TCP/IP environment also simplifies the data environment and thus maintenance. This has major advantages for operators and maintenance providers, who will no longer need to co-exist in separate worlds.