In early 2000, SACLANTCEN, NATO’s undersea research centre, (now CMRE) purchased the Ocean Explorer – Version C (OEX-C) Autonomous Underwater Vehicle (AUV) from Florida Atlantic University (FAU). It was the most advanced AUV of its time and currently one of the most versatile.

One of the most crucial technical decisions made by the creators of the OEX-C was the selection of a LonTalk, TP-1250 speed, peripheral data/control bus connecting various sensors and actuators throughout the AUV.

The very nature of the LonTalk protocol allowed the distribution of command and control functionality among the nodes present throughout the AUV. This allowed for a minimally powerful central CPU that was only responsible for the navigation of the AUV. Another powerful advantage of LonTalk is the expandability it provides.

This is an extremely important feature in AUV technology as the primary role of the vehicle is to be a transport platform for varied sensor packages. LonTalk allows minimal integration times of new sensor packages.

Application of the LonTalk TP-1250 Interfaces

The OEX-C has been in full operation for over 15 years due to its reliability and upgradability. However, “End of Life” (EOL) issues have accompanied its longevity. One of the primary concerns was the operating system of the central navigation computer and its tight marriage to the main computer hardware and LonTalk interface.

The CPU was no longer being sold, the OS was no longer supported and the manufacturer of the LonTalk NIC was no longer in business. The OS in question was QNX4.0. In early 2000, the choices of an RTOS (Real Time Operating System) were few. VxWorks was the leading RTOS at the time but licensing was extremely expensive. The creators of the OEX-C chose QNX4.0 since it was a “free” RTOS for academia and non-commercial developers.

The main computer was a simple PC/104, i686, with on-board devices (Ethernet, etc.) that were supported by QNX. Of particular importance was the PC/104 based LonTalk TP-1250 NIC, supported by QNX, attached to the CPU via the PC/104 ISA bus. The navigation software reads all AUV sensor data from the LonTalk bus via the PC/104 NIC. The navigator then sends the correct direction and speed commands, via the NIC, through LonTalk to the rudders, stern- planes and motor. It is easy to see that the PC/104 NIC is the core of the navigation command and control system. 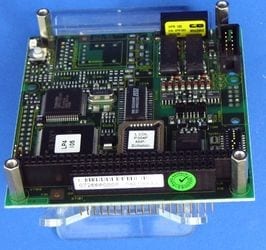 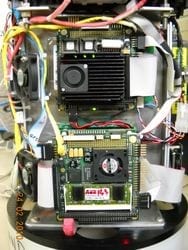 The Easylon Interface as cheap Connection from PC and Network

CMRE decided to tackle all EOL issues simultaneously: Migrating from QNX4.0 to Linux, choosing a new navigation CPU and finding a new PC/104 LonTalk NIC. The ubiquity of Linux and Linux-compatible CPU’s have made the first tasks manageable which yielded a new stable and predictable navigational platform.

The search for a Linux compatible, PC/104 LonTalk NIC equipped with a TP-1250 transceiver was challenging. We were very fortunate to discover Gesytec, which offered the perfect choice of a replacement NIC: The Easylon PC/104 Interface. The Easylon Interface is a cost-effective link between a standard PC or a PC/104 computer and the LonTalk network.

Of critical importance was the included Linux driver that worked flawlessly with the chosen Linux distribution and modern CPU. Currently, the NIC easily handles a mean TP-1250 bandwidth requirement of 30% with bursts of up to 95% usage. We confidently predict that this combination of newer systems easily gives us another decade or more of operability.1

1During the writing of this article, one of the two OEX-C’s operated by CMRE, completed a 13 hour mission during a NATO exercise, using the Gesytec Easylon PC/104 interface as the NIC for command and control.