The “Frischwerk” pilot shop of Ludwig Dalacker & Son in Aalen is a true attraction among the petrol station shops. Due to the spatial separation from the fuel- and tobacco area on one hand and the bakery with café and fresh bar on the other hand, the shop invites you to linger over almost 100 m2 of sales area. Perfectly tailored to its customer’s needs, one looks for the typical gas station flair in vain. Dalacker’s customers are firsty led through a modern furnished salesroom with fresh goods and visually appealing wood paneling. The shops’ concept is well rounded by the latest cooling technology.

With the concept of Lekkerland, the “Frischwerk” was equipped with StationGuide, an in-house development of Web.Cloud.Apps GmbH, which is focused on gas station operators in particular. With Software-as-a-service, all important processes can be organized, for example the cooling system and durability of food products.

Perishable goods usually land prematurely in the bin, since the consumption period has not been fully exhausted, caused by the insufficient identification of the expiration date. A special modul for downtimes is used to record the goods in a minute-by-minute manner and can be fully utilized. 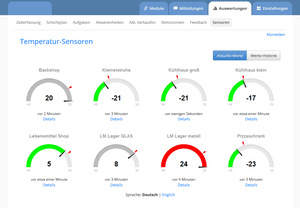 An evaluation of GesySense temperature sensors. The software captures the values and alerts the alarm if the temperature is too high or too low. 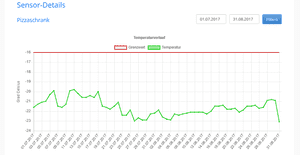 Best quality of the goods thanks to GesySense

Its temperature monitors Dalacker safe and reliably with GesySense and is glad to be able to guarantee their customers the best quality. The cooling cabinets are monitored permanently and in real time using the GesySense wireless sensor system. Thanks to the temperature sensors, the shop operator is immediately informed when the cooling chain is interrupted. This saves money, since no food has to be disposed of unnecessarily and ensures optimal customer comfort.