Green Energy and Hydrogen Mobility with IFSF for the forecourt environment

Hydrogenics is the worldwide leader in designing, manufacturing, building and installing industrial and commercial hydrogen generation, fuel cells and MW-scale energy storage solutions. With over 60 years of experience, Hydrogenics is helping to accelerate a global “power shift” for a cleaner energy future. One of the applications Hydrogenics works with is power-to-gas, a globally innovative way of storing and transporting energy. Hydrogenics is also supplying Electrolyser for the H2 project in Aberdeen, Scotland, where hydrogen mobility plays a major role. For the communication of its networks, Hydrogenics uses Gesytec’s connectivity solution to achieve optimum controlling of devices and to realize networking of the entire site and remote access from its facilities.

IFSF as a solution for flexible power to gas systems

Power-to-Gas bridges the power grid and the natural gas system to unlock new options for energy conversion and storage. It is an innovative solution for energy conversion and storage solution using electrolysis.  It  integrates  renewable  sources  of  generation,  converts  surplus  electricity  to  produce  hydrogen  or  renewable  gas,  and  leverages  the  attributes of existing natural gas infrastructure including the transport of energy  and seasonal storage. Hydrogen is the common denominator to a cleaner energy  future. It provides a link to capitalize on the vast renewable potential of alternative  generation  sources  using  the  unparalleled  energy  storage  capacity  and  the  flexibility of the natural gas system.
Hydrogenics uses the IFSF Router+ of Gesytec’s brand Easylon to make optimum use of the standard IFSL-LON communication protocol. The IFSF LON/IP Router+ connects an IFSF-LON compatible network with an IFSF-IP network. The router is equipped with an Ethernet and a LON TP/FT-10 connector, the router works with DIN EN 14908 standards and enables communication between devices operating in mixed IFSF networks. Diagnostic information can be retrieved over the IFSF LON/IP Router web interface. With the IFSF Router+ from Gesytec, Hydrogenics sets the course for a clean energy future. 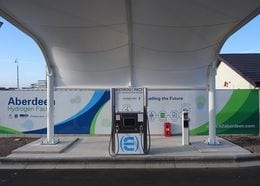 A hydrogen dispenser in Aberdeen 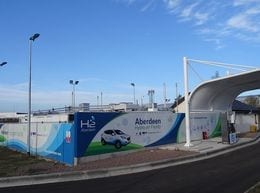 Aberdeen is a pioneer in the hydrogen economy

Hydrogen is the most abundant element, constituting roughly for about 75% of the elemental mass of the universe. It is also safe to manufacture, store and transport. For this reason, hydrogen is increasingly being used in the mobility of fuel cell electric vehicles. Hydrogenics supplies electrolyzer for the H2 Aberdeen project in Scotland. The hydrogen produced by HySTAT®-Electrolyzers is used for a variety of applications such as automotive fuels, energy storage and demanding industrial processes. Hydrogenics complements the existing system in Aberdeen to expand the hydrogen fuel supply area. The city is a world leader in the development of the hydrogen economy and reduces CO2 emissions for future generations. Aberdeen is also the first city in Europe to use hydrogen-powered vehicles for public transport. Hydrogenics and the city of Aberdeen use IFSF and reliable LON communication to implement the communication network between the hydrogen dispensers and the billing system.

Hydrogenics uses the IFSF Router+ for hydrogen filling stations. Gesytec offers everything that makes the standard IFSF-LON communication protocol optimally usable. Gesytec and Hydrogenics have been working together for many years, which is characterized by high delivery reliability. Hydrogenics, like our other customers, values the flexible and long-standing support of our qualified employees, which is tailored to individual needs.

Hydrogen stations and hydrogen vehicles have long since proven their suitability for everyday use, which means that the market is also constantly growing. Several companies from the automotive, gas and petroleum industries have joined forces under the name H2 Mobility with the common goal of creating a comprehensive infrastructure for hydrogen mobility in Germany.