Data collection in the service of Art 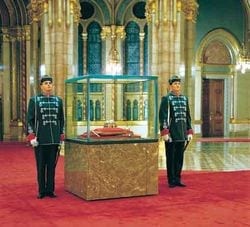 Valuable art and cultural assets should on the one hand be accessible to the general public, but on the other hand protected as best as possible from vandalism and theft. Harmful environmental influences can also cause long-lasting damage. Museums today achieve the fine balance between the interests of the general public and their duty to protect valuable exhibition pieces from damage and decay by using the latest technology. Air-conditioned exhibition cases not only protect the exhibits from wanton damage, but also from high humidity, harmful substances in the air and fluctuating temperatures. Gesytec’s Easylon interfaces transfer the measured data from the sensors in the display case to a central PC where it is monitored and controlled.

The firm Glasbau Hahn from Frankfurt/Main has amongst other things specialized in the construction of highly engineered exhibition cases for museums and private collections. They use the Easylon USB interface from Gesytec, among others, for the monitoring and control of the air-conditioning in the showcases.

Temperature sensors and humidistats are built into the showcases which are connected to a central computer via a LON network. The light intensity and nitrogen concentration in the showcases can also be captured. The data from the individual display cases is transmitted via a Gesytec USB LON Interface.

The current performance data is made available to the user via Gesytec’s Easylon OPC server. The OPC server allows user-defined OPC clients access to the LON network. Up to eight OPC server channels can be installed on a PC at the same time. This allows the simultaneous access to multiple LON networks. The measured data can be processed and displayed in the form of tables or diagrams.

The setpoint for temperature and humidity can be transmitted, via the Easylon interface, in the other direction to the showcase if it has air-conditioning. Up to now wiring has still been necessary to connect the display case to the PC, a wireless transmission is being worked on.

“The interfaces from Gesytec are optimal for the transfer of data from a showcase, because they are easy to install, simple to operate and run smoothly”, says Hans-Georg Wallenstein, freelance software programmer, at Glasbau Hahn who realised the display case control. User-defined numbers of showcases can be connected to the system via the interface. Showcases, as well as air-conditioning, currently in operation have conserved a multitude of objects. Air-conditioned display cases protect the Hungarian Crown in the Parliament Building in Budapest, a Gutenberg bible, a mummy in Denmark and historical costumes in China.