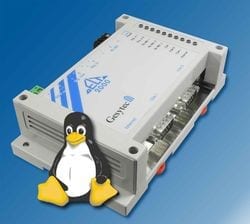 Linutronix provides the operating system and takes over support.

Aachen, November 25, 2013: Gesytec now offers the DELTA 2000 Box with Longterm Realtime Linux from Linutronix GmbH. This enables manufacturers of intelligent automation solutions to implement their applications with an open source operating system and at the same time enjoy the support of a competent partner, experienced with Linux.

DELTA 2000 is a cost-effective embedded platform for OEM solutions, which combines serial and digital ports, network functionality and a powerful CPU with the capability of being programmed under Linux and Windows.

DELTA 2000 is now available with a complete Longterm Realtime Linux operating system from Linutronix GmbH, a company that has many years of experience in implementation and support of open source technologies used in embedded systems. The company from Uhldingen-Mühlhofen, in southern Germany, also provides support for the operating system as part of a long-term cooperation.

As Gesytec guarantees the availability of the hardware for another seven years, this gives users a solution for which both the hardware and the software enjoy long-term support.
DELTA 2000 is an embedded PC for systems that require a variety of interfaces to the field level as well as a network connection, or in a nutshell: A black box between input and external communication. For example, it is frequently used as a data logger, protocol converter and data gateway.

With its broad range of interfaces it can, on the one hand, be used for local data gathering for surveillance and control systems, while on the other hand DELTA 2000 also offers a wide range of options for external data communication.
The optional interface to LonWorks TP/FT also opens up the possibility of processing data from LON networks together with serial, digital or analogue information and to make it accessible to other applications via IP connections.

DELTA 2000 works with Windows CE and Linux, thus enabling it to offer a wide range of ways of implementing your own applications. In spite of its broad range of interfaces, DELTA 2000 is very economical from a hardware perspective, while also offering the possibilities of a fully-fledged embedded operating system.

The DELTA 2000’s compact DIN rail housing contains an iMX287 CPU with a clock speed of 454 MHz as well as numerous interfaces to the field and control level. It has a 10/100 MBit Ethernet network connection.

For accessing data from the field level it has two digital 24V in- and outputs as well as three RS-485 ports. Analogue interfaces can be connected to the integrated Modbus if required. In addition to this, the new release of the DELTA 2000 also has a LonWorks interface. Data communications to parallel or superposed systems is possible either via Ethernet or via a modem-capable RS-232 interface. A microSD card with a maximum capacity of 32 GB is used for mass storage.

Linutronix stands for industrial grade Linux. Founded in 1996, the company focuses its activities on Linux and has helped numerous well-known companies implement Linux on their devices and machines.

The services they provide encompass the entire product development process, from the initial idea and providing assistance hardware and software design, commissioning, the preparation of board support packages, through to maintenance of the software throughout the whole product life cycle.

Linutronix has many years of project experience with industrial development, advising on the use of open source technologies, licensing issues, and the reasonable division between open source and proprietary components.

… or to put it correctly “Gesytec GmbH” has developed and manufactured hardware and software for automation since 1978. The goal we had back then hasn’t changed, and that is “… to build smaller, more cost-effective and innovative process control systems than the rest of the world”. That still applies today, even though the technological foundations have changed dramatically since the early days of microprocessor technology and continues to do so.

Networking was already the cornerstone of Gesytec systems for production automation and monitoring when the company was founded. It is also evident in the Easylon products for distributed intelligent automation with LonWorks as well as in the remote monitoring solutions with DELTA embedded devices.

The main focal point of our range of services is to establish Intranet and Internet connections beyond the boundaries of fieldbus systems and computer platforms. Gesytec Connectivity solutions connect networks and devices in smart buildings and systems, for building automation, facility management, industrial automation, for remote monitoring and control.