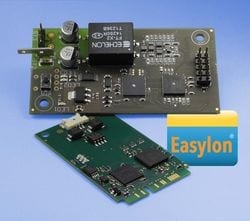 Parallel access of applications to LonWorks networks – that’s the special feature of the Easylon Interfaces+, which allow PCs to access this control network that is widely used in building automation, transportation systems and in industry in general. These capabilities are now also available in the form of compact socket interfaces, which can be used in embedded devices. Gesytec GmbH from Aachen, Germany, has launched two models of this newly developed product: a plug-in module for Mini PCI Express sockets as well as a USB plug-in module.

To meet the compactness requirements of embedded devices, components are needed that deliver top performance despite their small size. Either as PCI or PCIe plug-in cards for standard PCs, or as USB devices Easylon Interfaces+ already allow parallel transaction with DIN EN 14908 compatible networks, i.e. LonWorks. With the new Socket Interfaces+, these possibilities are now also available for small embedded devices.

The Easylon Mini PCIe Socket Interface+ is the smaller of the two modules. As a PCIe “Full-Mini Card with bottom-side keep outs (F2)” it uses the USB interface of this socket and thus implements a LON/USB interface. At 70 x 37 mm, the Easylon USB Socket Interface+, which is mounted on the base board and connected via pin connectors, is slightly larger.

In terms of the LON connection, both of the socket interfaces are available both as TP/FT or RS 4845 variants. In line with the range of possible applications, they are suitable for use over an extended temperature range from -40°C to +85°C. Drivers are available for all current versions of Windows and for Linux.

Benefits of the Interface+

Application programs can make use of the interface module as a VNI (Virtual Network Interface), with the computer emulating the logical part of the protocol layers. This means that there are up to eight interfaces available for parallel transactions in MIP or LNS mode, thus enabling eight applications to access the LonWorks network simultaneously.

Like all of Gesytec’s Easylon interfaces, the Easylon Socket Interfaces also boast full RNI (Remote Network Interface) functionality, making remote access via TCP/IP, i.e. via LAN as well as via the Internet, possible. Monitoring a LonWorks network is thus no longer bound to a particular location, but can be carried out from any PC with an Internet connection.