Reliably Collecting Data from the Field 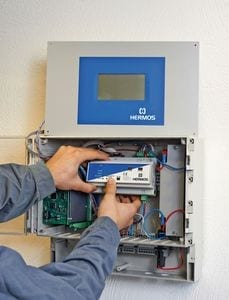 Aachen, November 25, 2013: HERMOS Systems, a specialist in automation projects from Dresden, has now implemented systems for monitoring facility data at 250 distributed locations for a customer who is active throughout Germany. The data communications core of the system is Gesytec’s Embedded Box DELTA 1000.

HERMOS Systems recently commissioned the 250th facility monitoring system for a customer who has sites distributed throughout Germany. The company from Dresden delivered the first system for this project about two and a half years ago. At some of the sites there are as many as 50 LON network nodes installed. The data from these nodes is sent to a higher-level control system.

The LON communication node acquires digital and analog data from the LON network on site, such as status messages, data on downtime as well as operating and error messages, for example from elevators or escalators, display panels or lighting systems. This data is then sent by telephone or GSM to the central building control system (BCS) and security control rooms.

Gesytec’s Embedded Box DELTA 1000 is at the core of the communication with the higher-level control systems. It is freely programmable and offers two interfaces to CEA-709.1 compatible networks (LonWorks TP/FT) as well as an Ethernet port and a modem connection.

HERMOS has implemented its own application on the DELTA 1000 hardware platform, for instance, the processing, evaluation and transmission of the messages, the triggering of switching operations and automatic function tests – for example of the emergency lighting.

Robert Berndt, software developer at HERMOS, also sees the cost as well as the functionality: “For many projects, where relatively small quantities of data need to be sent from each site, we don’t need a high-end CPU for communication with the outside world. With the interfaces that the DELTA 1000 offers and with Windows CE, the DELTA 1000 is exactly the right platform for our applications. Especially for projects involving multiple sites and with a corresponding numbers of devices it has proved to be an economical solution – both in terms of our programming and the hardware cost.”

Dieter Schunk, CEO of Gesytec, sees the DELTA 1000 as a system that is particularly well-suited to widely distributed sites: “We developed DELTA 1000 for distributed plants, where high-end CPUs are neither needed nor economical. With this system we can offer our customers a reliable hardware platform that enables them to implement their applications simply – and first and foremost economically.”

The DELTA 1000 uses cell phone or landline connections to communicate with the control systems, meeting very specific requirements for the reliability of the data acquisition, buffering and transfer of data, because the monitoring of distributed locations often involves safety-critical plant data: For example, the system warns of faulty system components, overheating, leaks and unauthorized access.

In such instances, data transfer reliabilty is an important aspect. Using algorithms specially developed for this system, the DELTA 1000 is able to detect disruptions or faults in the telecommunications system or a failure of the BCS. Furthermore, HERMOS has implemented additional functions to ensure that the system provides a high level of reliability. These functions include autonomous redial with ring tone and receipt recognition, automatic recognition of the availability of the control center as well as data transmission to a redundant BCS, which also has a redundant security control unit.

A 7” touchscreen panel can be connected to display error and operating messages as well as for operating and performing switching operations.

Gesytec developed the DELTA 1000 primarily for use with monitoring and control systems that have to communicate with the outside world. It provides the platform that users can use their own software on.

The main features of the DELTA 1000 are:

The device software optionally includes an SQL database, a web server and a CEA-852-compliant LON/IP interface.

With a power consumption of less than 3 W the DELTA 1000 is also ideal for tasks which rely on keeping power consumption to a minimum, such as distributed systems that are powered by solar panels, for example, for which embedded PCs were out of the question in the past.

HERMOS Systems GmbH from Dresden is an independent system integrator and is part of the international HERMOS Group. HERMOS’s core competence is in the field of automation solutions for machines, plants and buildings. HERMOS, which was founded in 1977, develops and implements IT solutions for production processes and sites, relies consistently on open and flexible solutions.

Its range of products and services includes programmable controls as well as the project planning and implementation of networks and software solutions for control rooms, including the necessary hardware. HERMOS solutions are founded on the company’s specific know-how and its long and extensive experience in a wide range of technologies and industries.
The HERMOS Group has 460 employees.

… has developed and manufactured hardware and software for automation since 1978. The goal we had back then hasn’t changed, and that is “… to build smaller, more cost-effective and innovative process control systems than the rest of the world”. That still applies today, even though the technological foundations have changed dramatically since the early days of microprocessor technology and continues to do so.

Networking was already the cornerstone of Gesytec systems for production automation and monitoring when the company was founded. It is also evident in the Easylon products for distributed intelligent automation with LonWorks as well as in the remote monitoring solutions with DELTA embedded devices.

The main focal point of our range of services is to establish Intranet and Internet connections beyond the boundaries of fieldbus systems and computer platforms. Gesytec Connectivity solutions connect networks and devices in smart buildings and systems, for building automation, facility management, industrial automation, for remote monitoring and control.